My cellphone rings, it’s Gloria from Mosaic Sales Solutions; Mosaic is one of the largest marketing firms in the world. Gloria is working on a project for XBOX Canada and tells me she found our website and saw that we catered to Power-Sports enthusiasts. “Yes”, as I tell her that, “we offer access to some of the best trails in Northern Ontario and we call it the MooseBack Trail System, where logging roads, old mine sites, trappers trails, abandoned rail beds and routes intersect, creating boundless options for outdoor and backcountry motorized vehicle fanatics.”

We discuss how Mosaic is coordinating a Nation Wide promotional campaign for XBOX Canada, as they work their way towards releasing the “Forza Horizon 3” video game — a car racing video game — that takes place in Australia. The game is to be released in Montréal on September 27, supported by promotional videos they shoot in various locations and then are released via social media channels as the looming launch day nears. Gloria tells me that this version of Forza Horizon 3 features exclusive “Polaris RZR Side by Sides” for which they need to find shooting locations that will mimic that of Australia’s outback and landscape.

I immediately tell her that Northern Ontario has all that she is looking for, it offers amazing vistas, sandy landscapes, old mine sites, industrial sites, logging roads, trails and rugged areas that could pass off as being Australia… it’s Northern Ontario… We have a little bit of every geographic landscape in the world right in our backyard… wink wink. Having given my best sales pitch, I then sent them some pictures of Algoma Country’s diversified scenery and landscape… what I called God’s Country… which included action shots of Dubreuilville-ites doing their day in and day out magic riding Side by Sides, ATVs and dual sport motorcycles, mud run and dust ups. It was not long before they were sold on the idea.

The Mosaic team used the material we sent them and pitched it to their executive team. Everyone agreed that the proposed settings could more than adequately meet their needs. The entire Forza Horizon 3 campaign titled “From Vancouver to Montreal” and #AcrosstheHorizon, promotes two options to their viewing audience. Using social media feeds such as Facebook, Twitter, Instagram and their own XBOX Canada website, the team serves up some adventure options. The options depict an activity that can be played on the game i.e. in our case, riding a “race ready Ford F150 or a Polaris RZR Side by Side” through Northern Ontario terrains.
The Mosaic team’s challenge is to produce the videos in a timely manner so that they can be released via social media in an almost real time fashion in order to create excitement and anticipation for the games release at the end of the week long campaign. Gamers choose Option A or B of the video mash up they would like to see across the social media platforms and the promotional team releases the winning version following a vote count using the media channels. All of this activity is also being documented and reported using other gaming reporting sites such as GTPlanet, the public relation firm that covers these games to their 250 million subscribers. That’s correct 250 million gamers subscribe to GTPlanet’s news feed about new games, and their features etc…. it is truly another world.

The Northern Ontario segment of the challenge placed the race ready “Ford F150” against the “Polaris RZR Side by Side”. The gamers chose the Side by Side “Polaris RZR” action over the “F150” as it literally got “Hosed” by the competition. Let’s say “it was wet with envy” in the end.

To say that this was fun is an understatement, it was a “RZR blast”. We recruited some of the best Side by Side riders Dubreuilville has to offer, semi-pro in my books. These guys don’t get sponsored to ride like they do. The locals do it for fun, as often as they can. 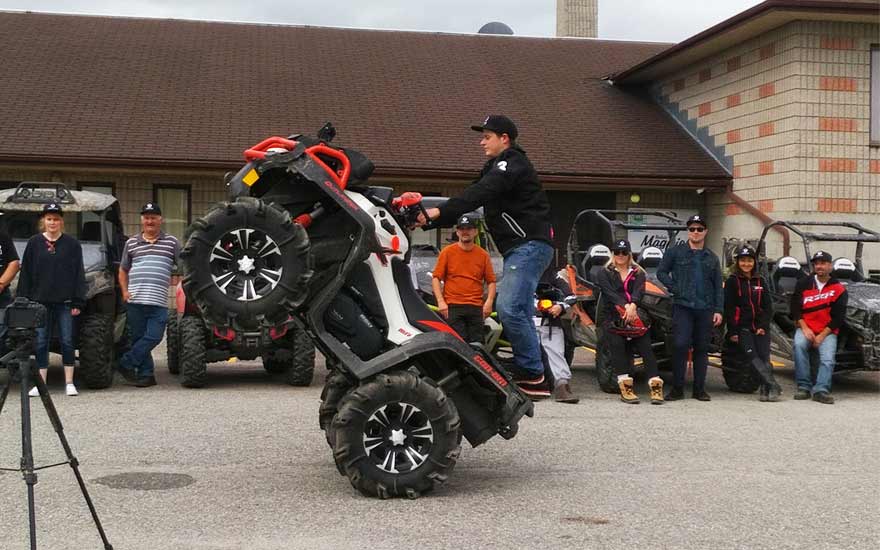 The Mosaic team, including Kyle from GTPlanet, were amazed at the scenery and vast expanse of Northern Ontario. They had a blast taking turns and almost fighting for the shotgun seat as we repeated certain scenes making sure we had the right visual and scene for the video. Impressively, these guys were fearless.

In the end, we shot the video over 3 days, taking in the Magpie River’s edge as the reservoir water levels were down, it presented us beach and dune like vistas, the overcast sky and rain offered mesmerizing backgrounds proved to be movie like settings for the fast paced scenes. The final video which was released on September 20 has already been seen 200k times (at time of writing). Over 30k daily views. 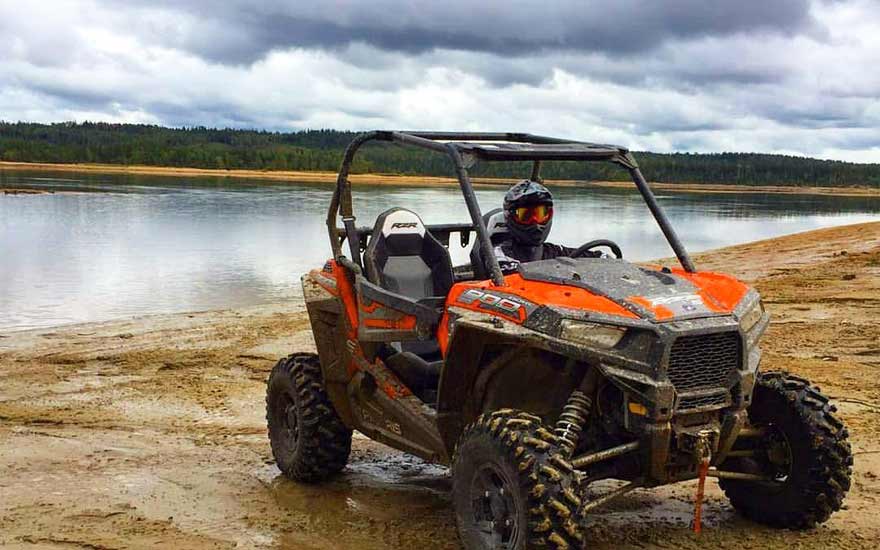 My take on this is the video game world demographics is mind boggling, its global reach is exponential and its delivery of virtual adventure is an excellent segway to entice potential tourists to our vast Northern Ontario landscape.

As the Mosaic and GTPlanet reporters write and blog about their Side by Side experience, they remember the good times they had in the ManCave, the Hot Tub and Sauna, as they cut their video footage in the evening and reminisced about the day’s activities. The Magpie Relay Motel & Resort was conceived for this purpose as one relaxes, replenishes and restores oneself after a long day’s ride. I am glad to see that we can appeal to all types of clients, gamers and riders alike.

In the end, we hope to tie the “MooseBack Trail System” and the Dubreuilville “Magpie Relay Motel & Resort” to the success of this short production as they carry us through social media tags and links while we attempt to build the next Hatfield and McCoy of the North. (The Hatfield-McCoy Trails of West Virginia is one of the largest off-highway vehicle trail systems in the world, offering something for every skill level.)

Can’t wait to see who is going to call next. We are always open to new ideas if it will help people learn about our little corner of God’s Country. Ride the MooseBack Trail System in Algoma.

Travelling from the States?
Here are some things
you should know.